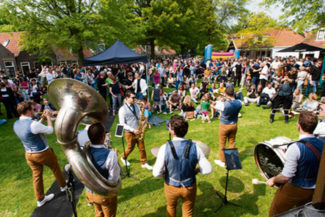 The freely accessible Kaaspop festival, which was held in Edam last Saturday, was again very successful. As a sponsor of the event, we found that not only, but also the many visitors greatly enjoyed the unexpected sun, and of course the various acts.

This story is confirmed in various regional newspapers. The Noordhollands Dagblad opened with: “The weather forecasts were not optimal, but as usual, Gerrit Hiemstra and associates were once again wrong. Kaaspop 2019 would be a great day full of singing, dancing and lots of fun for young and old. ” “At the Beestenmarkt there was plenty of entertainment for the children as well as music. There was an air-spring cushion and the children could tinker and have their faces painted at the make-up stand, where it was very busy, “according to Nieuw-Volendam.

The Stadskrant thought it was a huge party on Saturday in Edam with an extensive musical program, free for everyone. Thanks to the free admission, Kaaspop really became the edammer himself, with young and old and everything in between. All in all a successful edition.

See you next year!